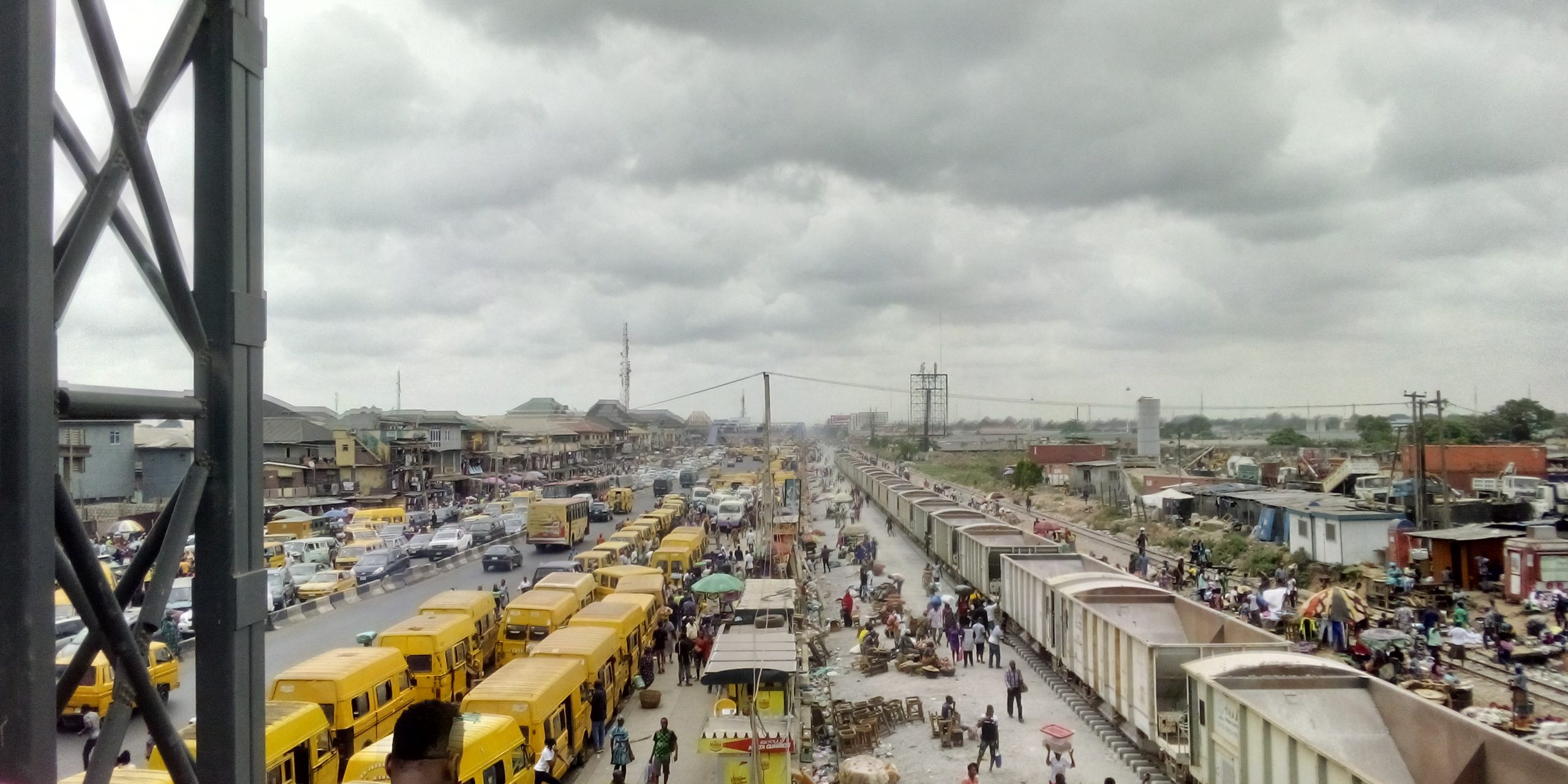 Becky’s Journey: Can a High Impact Documentary Stem the Tide of Human Trafficking in Benin City?

Documentaries have increasingly become viable tools for social change. A recent landmark study shows an upward shift in social engagements towards global poverty following the release of “Stand Up Planet”, a documentary series on extreme poverty. Building on the success of this initiative, scholars and practitioners in filmmaking are confident that a separate series on the plight of human trafficking victim(s) can equally drive social change against the trafficking in women for sexual exploitation. Simultaneously, publications of this kind carry an additional benefit, addressing the poor public awareness problem identified by the United Nations as the bane of anti-human trafficking campaigns worldwide.

A stunning example of a well-crafted and impactful story is “Becky’s Journey“, a 2014 documentary based on the true-life experience of Becky, a victim of human trafficking. The motion picture provides compelling insights into the high-risk movements of women from Benin City in Nigeria to Europe – seeking a better life through prostitution and the sex trade. The short film, directed by Sine Plambech, a researcher from the Danish Institute for International Studies, has won several awards, including the Excellence Award at the 2015 International Festival Against Trafficking and the Best Documentary Award at the Let’s All Be Free Festival in London. The documentary has also been screened at film festivals in the United States of America (USA), Mexico, Asia and Africa and remains a reference resource for anti-trafficking campaigns and research.

Despite numerous competing documentaries on human trafficking rings in Benin City, Becky’s Journey gained particular global acclaim in a short period of time. While it is easy to attribute this success to the gripping narration by Becky, the film’s main character, it is the producer’s ingenuity and presentation of ethnographic research findings which is most notable. The documentary links the subject matter of human trafficking to the dire economic situation in Nigeria. The film’s formative processes, including the originality of its concepts, sights, sounds, and structures, are well fitted to illuminate Becky’s experience and trigger passionate empathy from the audience. Beyond its entertainment value, the documentary stirs public consciousness towards the harrowing realities of human trafficking in Nigeria.

A further look into the theoretical literature highlights the ways in which documentaries such as Becky’s Journey can become veritable tools for social change. In fact, the origins of documentaries themselves are rooted in societal transformation. John Grierson, the Scottish filmmaker whose flagship film ‘Drifters’ depicted herring fishermen in the North Sea, reportedly first coined the term “documentary”. According to Grierson, a documentary is an “artistic representation of actuality” that enlightens an audience to inspire them to bring about a social change. Whereas some scholars have emphasised the need for documentaries to proffer solutions to given problems, others believe that major works should aim to raise public consciousness.

However, while Becky’s Journey does not appear to make outright policy recommendations, the story provides important insights for relevant agencies with responsibilities to address the immediate and remote causes of human trafficking in Nigeria. For instance, Becky’s account pinpoints how economic hardships makes women vulnerable to traffickers. Peer pressure, cultural values, greed, and the glamourous lifestyles of successful “madams” are other portrayed motivations for potential victims. Further, the porosity of trafficking routes is an indictment of cross-border policing in Nigeria, Niger and Libya. These and other issues in the documentary have a basis in public policy. They indicate how stakeholders can better understand and carry out their roles to stem the tide of human smuggling in Nigeria and beyond.

Becky’s Journey and the Finneran Model 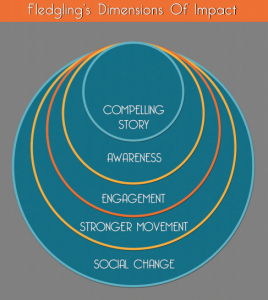 The Patricia Finneran Creative Impact Model underscores the steps necessary for Becky’s Journey to trigger grassroots mobilisation against trafficking. Specifically, the model recommends a social change process that begins with persuasive storytelling to create awareness, which ultimately stirs the needed engagements amongst stakeholders. These engagements are expected to trigger a movement that brings about the desired change at the institutional, political or community levels. Therefore, documentaries such as Becky’s Journey can have significant catalytic importance, setting off a chain of positive events by increasing baseline awareness of human trafficking to bring new facts to the limelight and initiate meaningful conversations.

However, as shown in the model, the support of critical stakeholders is required to complete the circle of social change. To put it another way, the final two stages of the Finneran model go beyond the scope of the producer of Becky’s Journey. Stakeholders in the global fight against human trafficking, including the Nigerian government, should pick up from where Sine Plambech left off by adopting Becky’s Journey as a campaign tool for social mobilisation against human trafficking in Benin City.

Edo State and the 2020 Trafficking in Person (TIP) Report

Purposeful stakeholder action has become all the more necessary because, despite previous and current campaigns, human trafficking cartels continue to thrive in Edo state, which has Benin City as its capital. According to the 2020 Trafficking in Person (TIP) Report, out of 4,316 victims of trafficking repatriated to Nigeria in 2017, 4,000 had departed from Edo state. Similarly, of the 3,160 Nigerians repatriated from North Africa in 2018, 80% were trafficked from Edo state. Unfortunately, most of those repatriated in both cases have since been re-trafficked to North Africa and Europe. Accordingly, frontline agencies like the National Agency for the Prohibition of Trafficking in Persons  (NAPTIP) and the Edo State Task Force Against Human Trafficking (ETAHT) need to rethink their strategies towards grassroots mobilisation against trafficking.

The rejigging of strategy towards community-based solutions has become increasingly necessary due to the fact that high impact documentaries – such as Becky’s Journey – seldom garner the necessary levels of engagement to trigger social change. For instance, Oluture, a 2019 indigenously produced documentary on human trafficking, has drawn more attention in Nigeria than Becky’s Journey. This difference has no bearing on the quality of the documentaries. Instead, it is a testament to the aggressive promotion of Oluture on available local media channels. Hence, unless all hands are on deck to promote Becky’s Journey – and other potentially impactful works – locally, the valuable insights provided by these productions will remain unutilised.

Moreover, unlike many other first-hand stories, accounts such as those presented in Becky’s Journey reveal verifiable details, including the gruesome death of one particular character during the ill-fated journey. These and other facts can be used to sensitise the public about the perils of human trafficking. Further, by translating Becky’s Journey and other human-trafficking documentaries into local dialects like Essan, Ora, Etsako, and Itsekiri, the anti-trafficking messages can be spread to a broader audience in local communities in Edo and other parts of southern Nigeria. International NGOs and advocacy groups should liaise with NAPTIP and ETAHT to ensure the mass broadcast of Becky’s Journey on national television and Nollywood platforms. These stakeholders can equally initiate a conversation around the documentary and the subsequent developments since its production, including the eventual death of Becky. Such engagements could utilise the provisions of the United Nations Convention against Transnational Organised Crime (UNTOC) to encourage victims of trafficking to come forward with their stories and support the fight to end human trafficking in Nigeria and around the world.