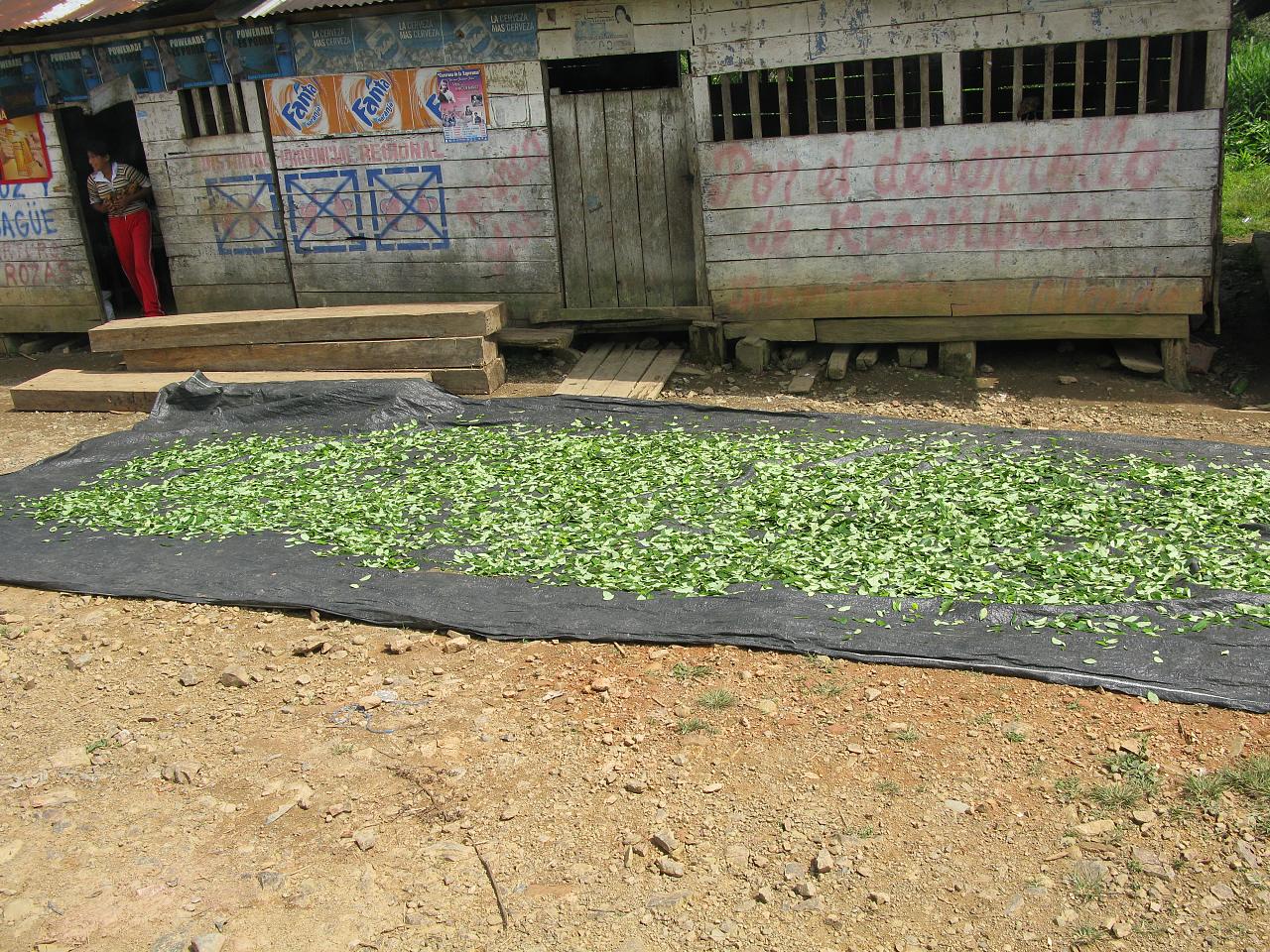 Historically, the region has responded to the drug trade through a combination of stringent legislation and forced crop eradication, leading often to increased violence, prison overcrowding and the destruction of rural communities.

Since 2004, the Bolivian government has taken a completely different approach, legalising coca cultivation for domestic consumption, and working closely with coca farmers to regulate its growth in specific regions. As a result of this strategy, coca cultivation has been steadily declining since 2010, falling to its lowest level on record in 2015.

However, now that cultivation limits have increased, will Bolivia re-emerge as a major distributor of coca destined for the illegal market?

The coca leaf has been used in the Andes for millennia, either chewed raw or as an ingredient in tea and food. In its unprocessed form, coca is a mild stimulant similar to caffeine and helps to alleviate altitude sickness. However, it is more commonly known for its psychoactive alkaloid – cocaine – which is processed from the coca leaf through a chemical process of acid/base extraction.

Bolivia remains the third-largest producer of coca worldwide behind Colombia and Peru. While there is a substantial legitimate market in Bolivia for unprocessed coca, this is far outweighed by the scale of the global illegal cocaine market, which in 2008 was valued between $80 billion and $100 billion.

In the 1980s, coca cultivation in Bolivia expanded considerably, out of the Yungas and into the Chapare region and beyond. As a result, coca became Bolivia’s most lucrative crop, with production soon flowing into the international cocaine market. In the late 1980s, approximately 15% of cocaine in the US originated from Bolivia.

In response to this emerging threat, the US launched concerted efforts to eradicate coca cultivation outside the Yungas region. In 1988, under strong US pressure, Bolivia passed new legislation – Law 1008– which imposed strict limits on coca production and harsh penalties for drugs offences.

The law stipulated that 12,000 hectares was sufficient to meet the legal demand for coca, and required all excess crops to be eradicated by force. Subsequent US-led enforcement resulted in episodic violence between US drug police and the Bolivian armed forces. In particular, in 1997, a US-funded eradication programme plunged the Chapare region into violent conflict.

This violence was coupled with ever-increasing prison overcrowding. As the Bolivian expert Linda Farthing wrote in 1998, Law 1008 was ‘superimposed on an extremely weak judiciary’, rife with corruption. The law made no distinction between street-level dealers and major traffickers, and ensured that Bolivians charged with drug-related offences of any severity were imprisoned indefinitely without the possibility of bail. At the same time, it assumed the guilt of the accused, and deprived them of their right to legal representation.

The law did little to curb coca cultivation. In 1995, The Economist reported that new coca cultivation was outpacing eradication efforts. As more coca was destroyed, its value increased, making it more attractive to other growers. In a country where coca is grown by traditional farmers on small plantations, crop eradication meant destroying the livelihoods of families and communities. Traditional farmers who had historically grown coca for the legitimate market were replaced by profiteering criminals, who sought to take advantage of the increasingly lucrative illegal cocaine trade.

In response to this drastic worsening of conditions, in October 2004, a decision was taken to legalise coca cultivation for domestic consumption, and regulate its growth in designated regions. Abandoning forced crop eradication relied on cooperation with growers’ unions to enforce cultivation limits, while investing heavily in alternative development projects, incentivising farmers to switch to other forms of agriculture.

The initiative has proved effective in reducing coca production. In the years immediately following legalisation, coca growth slowly increased, rising from 25,400 hectares in 2005 to its peak of 31,000 in 2010. However, since 2010, cultivation has been steadily declining, falling by more than one third to 20,200 hectares in 2015 (see Figure 1), less than half the total area under cultivation in the period 1990–97.

The success of Bolivia’s cooperative coca reduction programme has not gone unnoticed. According to UN Office on Drugs and Crime (UNODC ) representative Antonino De Leo:

Bolivia’s achievement over the last four years is well known: reduction of coca cultivation through dialogue, participation of coca growers’ unions, and a policy based on respect for human rights. The results are clear in the eyes of the international community.

What is less clear to observers is the potential impact of almost doubling the upper limit of legal cultivation – with questions over whether this will enhance or undo the progress witnessed to date.

In 2013, an EU-funded study found that only 14,705 hectares of coca crop were needed to supply the legal coca market in Bolivia. Actual cultivation has always far exceeded this level, and the new upper limit of 22,000 hectares leaves plenty to spare for the illegal market.

Morales claims that this surplus will be directed towards coca industrialisation projects, such as a pharmaceuticals plant planned for construction with assistance from the Cuban government. The new law sets out guidelines for state regulation of the production, distribution, sale, industrialisation and exportation of Bolivian coca.

It is hoped that increasing the scale of the legitimate market will encourage growers to stop selling to illegal buyers, as the profit differential between selling to the legitimate and illegal markets will be too small to justify the risks associated with breaking the law.

Yet since increasing the legitimate market for coca is unlikely to be sufficient to prevent growers from selling to the illegal market, the consequences of breaking the law must also be increased. Currently, farmers who sell coca illegally do not face prison sentences. In September 2016, new legislation proposed a penalty of up to three years’ imprisonment for cultivating coca for the illegal market. If this becomes law, it is likely to deter many growers from engaging in the illicit trade.

Meanwhile, further integrating coca growers into the legitimate economy is likely to be more effective in damaging the cocaine trade than forcibly destroying crops. In fact, evidence suggests that forced crop eradication does not lead to a meaningful reduction in cocaine production. UNODC’s most recent world drug report found that the total area under coca bush cultivation had fallen by 31% between 1998 and 2014, but that cocaine production was at the same level in 2014 as it had been in 1998.

This is because cocaine-processing facilities have developed sophisticated methods to increase their efficiency, manufacturing higher quantities of the narcotic from smaller volumes of coca leaf. This observation suggests that anti-drug policies should focus on detecting and destroying cocaine laboratories, rather than eradicating coca crops.

The experience in Peru and Colombia reinforces this argument. In Peru, following a steady increase in cultivation of 44% between 2000 and 2011, the government has placed crop eradication at the centre of its anti-drugs strategy, reducing the total area under coca bush cultivation by 31% between 2011 and 2014.

In Colombia, militaristic law enforcement and aerial destruction of crops reduced cultivation levels by 58% between 2000 and 2009. But this approach has come at a high social cost in both countries. By targeting coca farmers rather than cocaine. producers, the Colombian and Peruvian governments have alienated rural communities and displaced criminal growers to border areas, national parks and indigenous reserves.

Growers have responded to eradication by raising productivity through high-density cultivation and drip irrigation, while developing increasingly aggressive forms of defence, such as protecting their crops with landmines.

Indeed, despite decades of relentless law enforcement and crop eradication in Peru and Colombia, coca growers remain undeterred. Last year, UNODC estimated that coca cultivation in Colombia grew by 39% between 2014 and 2015, having previously risen by 44% between 2013 and 2014 – the largest single-year spike on record.

At its 2014 level of 69,000 hectares, Colombia accounted for 52% of global coca cultivation. At the 2015 level of 96,000 hectares, the country continues to far surpass Peru and Bolivia as the main source of coca worldwide. Recognising this failure, it seems even Colombia intends to take a leaf out of Bolivia’s coca policy book. Despite historically being the primary advocate of crop eradication, in 2016, the decision was made to focus instead on locating and destroying drug laboratories, in an attempt to attack cocaine production further down the chain.

In Bolivia, too, alongside a carefully considered coca cultivation policy, a similar shift in focus down the chain is required. As well as being a major producer country, Bolivia has recently emerged as a key transhipment point for coca paste and cocaine produced in Peru and trafficked by light aircraft into the booming consumer markets of Brazil and Argentina.

In 2015, Bolivian officials estimated that at least 60% of cocaine and coca paste seized in the country originated in Peru. Lack of migration. control and porous borders enable the easy transit of drugs and precursor chemicals, as well as traffickers, in and out of Bolivia.

Bolivia has also become an attractive destination for organised crime groups (OCGs) seeking to manufacture cocaine from Peruvian and Colombian coca. The number of cocaine factories discovered by authorities in Bolivia has been steadily rising, from three in 2005 to 73 in 2015. These factories are often run by Colombian OCGs, which have been displaced by relentless law enforcement in their home country. There are also reports of Brazilian OCGs setting up processing plants on the border with Bolivia.

As much of the cocaine produced in Bolivia does not originate from local coca, targeting cross-border flows and cocaine production facilities is crucial to effectively dismantling the illicit market. Recognising this, in 2016, Bolivia signed agreements with Peru, Brazil, Paraguay and Argentina to control the flow of drugs and has made concerted efforts to strengthen its land and air borders. In November 2016, it installed a vehicle scanner on the border with Chile, and purchased thirteen high-tech radars to monitor air traffic and identify illegal drug flights.

Given Bolivia’s ideal geographical positioning for opportunist traffickers, it is crucial that such efforts to strengthen detection and interdiction capabilities along its borders continue. This will require close collaboration and information sharing with the law enforcement agencies of Peru, Chile, Brazil, Argentina and Paraguay.

Yet more work remains to be done. OCGs seeking to exploit opportunities in Bolivia are all too able to take advantage of the country’s weak law enforcement institutions. Corruption is endemic within the police: it has been reported both among Bolivian officials and underworld sources that high-ranking police officials collude with, and are on the payroll of, drug traffickers. For instance, in 2011 Bolivia’s former anti-drugs czar and Police General Rene Sanabria was jailed for fourteen years for cocaine trafficking.

To make matters worse, the banking system in Bolivia is almost entirely unregulated, making money laundering relatively straightforward. As long as this situation is allowed to persist, Bolivia will remain an attractive destination for OCGs from neighbouring South American countries.

Despite public perception, Bolivia’s coca policy does not demonstrate an indifference to the drugs trade. On the contrary, it indicates the country’s determination to pursue strategies which have shown to be successful, while minimising the harm caused to individuals and communities. While investing heavily in the cooperative coca reduction programme, the Morales administration has also maintained and increased drug-interdiction programmes. In 2016, there were more than 12,000 drug control operations in Bolivia, resulting in over 3,500 arrests and the dismantling of more than 4,000 cocaine production facilities.

Rather than fuelling the illicit trade, the new legislation has the potential to further damage the illegal market in the region. This will be achieved, however, only if the Bolivian government continues to implement coordinated measures to detect and shut down cocaine factories, strengthen the country’s borders, address problems of internal corruption, regulate the banking system and impose consistent sentences for those who grow and sell coca illegally.

The South American cocaine trade is a complex transregional problem, and as such it requires a carefully considered, multidimensional and transregional response.

Alexander Babuta is a Research Analyst in the National Security and Resilience department at RUSI. His research focuses on policing and security in the digital age, in particular the use of big data, Artificial Intelligence and machine learning