Home   Blog   The Globalisation of Policing: A Familiar Tune 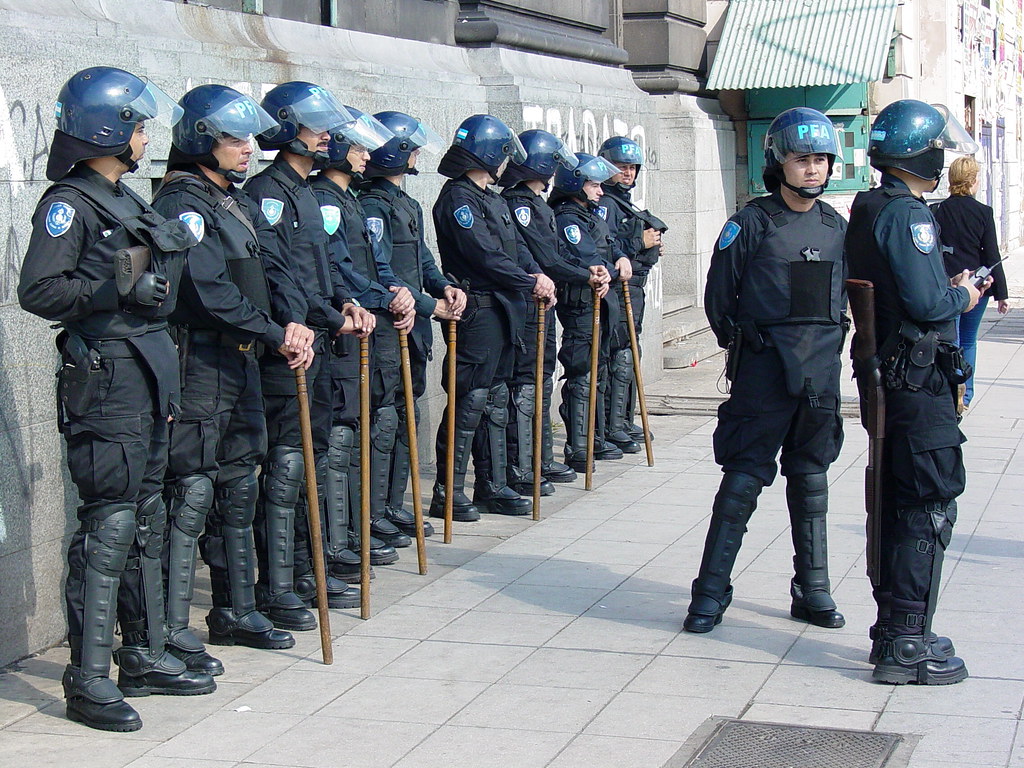 The Globalisation of Policing: A Familiar Tune

It is argued the world has been fundamentally changed by forces of globalisation that are driven by neoliberal, ‘Washington consensus’ free-market capitalism. This shift is so profound, it is said, that even the power of policing no longer resides solely with the nation-state and is instead dispersed among a variety of supra- and subnational non-state actors. However, a closer examination of these claims reveals many significant issues, not least the oversimplification and consolidation of a number of complex phenomena under the umbrella of ‘globalisation’. A more realistic account instead shows that the political economy of the world continues to be more or less international in character, and that global affairs are still largely driven by the pre-eminence of the nation-state.

The idea that policing has become a global, or transnational endeavour can be roughly summed up as follows: driven by neoliberal ideology, the post-modern world is now deeply permeated by economic, political and cultural globalism, which has created a polycentric global order that has gradually ‘hollowed-out’ the power structure of the nation-state by simultaneously drawing power upwards to supranational organisations, such as the WTO and the G8, and dispersing power downwards among a variety of non-governmental, non-state and rogue actors. Because of this change, the argument goes, policing functions have expanded far beyond the confines of the state, covering an ever-increasing range of human activity.

Characteristics of this new order include: the globalisation of private and public policing networks such as Interpol, the World Customs Organization and the Financial Action Task Force; increased international cooperation and embedding of transnational police officials; the expansion of regional and national security apparatuses, such as EUROPOL, ASEANPOL, the FBI, MI5 and the CIA; and so-called ‘glocal’ policing, where local practice is altered in response to transnational crime or political influence, therefore re-ordering local priorities, affecting policy import and transfer, and resulting in the restructuring of forces.

Woven through these ideas are threads of Foucault’s ‘governmentality’ and Garland’s ‘responsibilization’ theories of neoliberal social control systems, which serve to tie them together. Yet many of these positions often understate or overestimate a number of complex and highly entangled processes that have been evolving for the last 200–300 years. This is not to say these notions are entirely ill-conceived – it is clear that communication, information gathering and information sharing have been radically transformed in the last 50 years, and likely represent a persistent and truly global phenomenon.

The problem is that those pushing the globalisation of policing hypothesis rely on a number of problematic assumptions that are common to many theories of globalisation. One of these is the claim that the post-modern world has become deeply permeated by economic, political and cultural globalism, and that this was driven by neoliberal ideology. Yet it is well documented that this globalism is not new: the global economy was highly coordinated, mobile and very open in the late nineteenth- and early twentieth-century. Nor were these changes necessarily driven by neoliberal ideology. The globalisation hypotheses tend to ignore the diversity in banking, finance and models of economic development globally, where the analysis is heavily weighted towards the financial history of US, Europe and Japan, and once taken beyond those confines, this approach often reeks of naked orientalism. For instance, the ubiquity of neoliberal economic ideology is hard to reconcile with the experience of India, China, Taiwan, South Korea and other Asian economies, which achieved enormous growth, and significantly reduced poverty through heavily state-directed economic policies that are antithetical to neoliberal doctrine. Moreover, these approaches often ignore the trillions of dollars processed annually by Islamic banking and finance (which forbids the neoliberal cornerstone practice of usury), while generally portraying the US as a monolithic, coherent expression of neoliberal ideology, when a holistic examination of US economic and financial policy reveals a highly disorganised, fractured system with deep internal conflicts that has largely taken shape by reactively responding to crisis after crisis since the birth of the nation.

This globalism is not new: the global economy was highly coordinated, mobile and very open in the late nineteenth- and early twentieth-century

At its simplest, to be sustainable, the transnationalisation of policing idea relies upon expanding well-recognised features of statecraft until the conceptual frame of what ‘policing’ is becomes broad enough to fit the theory. For example, by relying on Brodeur’s concept of high and low policing, Bowling and Sheptycki make a distinction between policing that is focused on state security, and one that is focused on criminality and public order. Yet, with high policing, Bowling and Sheptycki are discussing a distinct type of policing involving state intelligence apparatuses, such as MI5, MI6, NSA and the CIA. They then fashion a tenuous association between this intelligence work (which has distinct limitations in most Western democracies) and intelligence-led policing initiatives, or the use of information systems like COMPSTAT by ‘low’ domestic police forces, as evidence of convergence between the two spheres. Their speculative allusion being: because of neoliberal globalisation, domestic policing is slowly merging with, or taking on characteristics and tactics commonly employed by ‘spy’ agencies. Yet, one need only look to the former East German Stasi – which would be a strong example of such a marriage in the West – to challenge the idea this hypothetical merger process in the US or UK might be related to globalisation.

In fact, given sufficient space, critiques could be levelled at any number of points in the ‘globalisation of policing’ hypothesis, whether regarding corporate security, UN peacekeeping, customs and border enforcement, immigration, or banking and finance. In most cases, what is presented as evidence of the globalisation of policing could just as easily be linked to changes in enterprise, regulation, statecraft or political power – but then it would simply be a study in international relations, and not a particularly strong one at that.

What is presented as evidence of the globalisation of policing could just as easily be linked to changes in enterprise, regulation, statecraft or political power

However, there is a parallel, if not slightly overlapping scholarship that makes a good case for the growing plurality of ‘policing’ and the entities that influence and direct forces of social control and regulatory practice in the domestic sphere. Yet I would still argue there is a significant contrast between those types of limited authority or private entities and what Bittner calls ‘the distribution of non-negotiably coercive force’ held by the state police apparatus – or, bluntly, ‘the bayonet, the billy, and the bullet’ – that ultimately backstops even the most benign of social democratic states.

Of course, it would be naïve to suggest nothing has changed in policing. Clearly, technological innovation has dramatically increased surveillance capabilities, information gathering and sharing, data analysis and data processing. Yet despite its popularity, once pulled apart, the globalisation of policing thesis seems more an exercise in speculative ‘futurology’ than a realistic depiction of the current state of affairs. In sum, regardless of technological advancements in communication and data handling, the changes we are witnessing have strong echoes of the past. Much as borders and trade were open in the 19th century, so did they close in the early 20th century – and given the state of world at the moment, this too is an eerily familiar echo.

Daniel White is an adjunct professor for the graduate program at Thomas Jefferson School of Law in San Diego, US, and holds a US law degree, an LLM in financial services and an MSc in Criminal Justice Policy from the LSE.