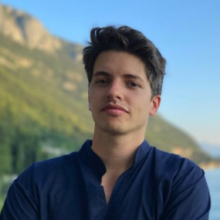 Alex Bish is a PhD candidate at UCL’s Department of Security and Crime Science and a Senior Analyst at the Global Initiative against Transnational Organised Crime. He specialises on transnational organised criminal networks, armed groups, terrorism, migration, and sub-state political dynamics in West and North Africa. His PhD research focusses on migrant smuggling and trafficking networks operating in the Sahel and Libya.

Alex has conducted in-depth fieldwork amongst hard-to-access groups in West Africa and the Sahel and has created and managed field networks of key informants, including in smuggling, trafficking and rebel groups across the region. Alex is also trained in quantitative and complex systems approaches to the study of crime and terrorism. He has advised the EU on political and security dynamics in West Africa and regularly provides expert opinions to the media and senior diplomats from the EU, US and UK on security dynamics in the Sahel/Sahara region.

Alex holds an MSc in Countering Organised Crime and Terrorism from UCL and a BA (Hons) in European Studies from King’s College London. A selected list of his publications and speaking engagements may be found here: https://www.alexbish.com/work