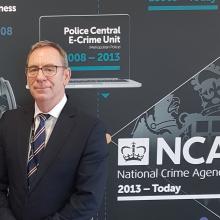 Dr Bill Merrill took up post as the Head of HUMINT for the National Crime Agency (NCA) in December 2018. An experienced law enforcement senior leader, Bill started his policing career after a stint in the Parachute Regiment. He joined Cheshire Constabulary in 1993 and worked as a Detective until 2000 when he joined the National Crime Squad as a CHIS handler. Bill moved between intelligence collection and investigations as a Detective Sergeant and conducted specialist surveillance and covert armed operations duties.

In 2013 Bill moved to the NCA working as a senior manager, in what is now known as the United Kingdom Protected Persons Service (Witness Protection). In 2015 Bill took up the post of Authorising officer for CHIS operations.

In 2017 Bill graduated with a Professional Doctorate focusing on Organised Crime, Threats to Life and Time Critical Decision Making. He enjoys general fitness and Chablis.