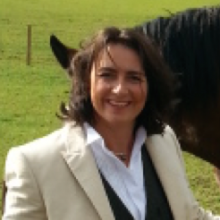 Hazel Cameron is a criminologist and a lecturer of Peace and Conflict Studies within the School of International Relations, University of St Andrews. She was awarded her PhD at the University of Liverpool in July 2010. Main research interests include state crime; global elite bystanders to crimes of the powerful; political violence; torture; genocide; war crimes; and crimes against humanity.

Hazel has spent over a decade undertaking fieldwork in Rwanda. She is currently researching the rationale of UK and US foreign policy towards Zimbabwe during a period of extreme violence that took place in the Matabeleland region of the newly independent Zimbabwe. Between early 1983 and late 1984, between 10,000- 20,000 people lost their lives. The murders were perpetrated by the state and carried out by the Fifth Brigade of the Zimbabwe National Army. Although widely reported at the time by the press, the international community largely ignored the massacres. These crimes against humanity, which also included torture, forced starvation, disappearances, displacements, and rape are commonly known as Gukurahundi.

Hazel Cameron is co-editor of the journal Genocide Studies International and is affiliated to the International State Crime Initiative (ISCI) and the Scottish Centre for Crime and Justice Research (SCCJR).