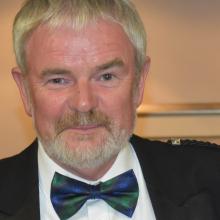 John M. Sellar OBE CF has been connected with law enforcement for almost five decades; from 1973 in the Scottish Police Service, from 1997 with the United Nations and, since 2011, in an advisory capacity. As a Detective, he investigated murders and other serious crime but also dealt with human rights abuse in Scotland’s maximum-security prison.

In 1997, Mr Sellar moved to Switzerland, handling anti-smuggling, fraud and organized crime issues for the Secretariat of the Convention on International Trade in Endangered Species of Wild Fauna and Flora (CITES), ultimately becoming Chief of Enforcement. During 14 years with CITES he conducted 234 missions to 66 countries, assessing enforcement in the field and designing strategies to tackle wildlife trafficking. He formally retired to Scotland in 2011 but remains active in both a pro bono and ad honorem manner; which has involved further foreign travel.

He is a Senior Advisor to the Global Initiative Against Transnational Organized Crime, is the Senior Law Enforcement Advisor to the Siracusa International Institute for Criminal Justice and Human Rights and is a member of a committee and working group of the International Association of Chiefs of Police.