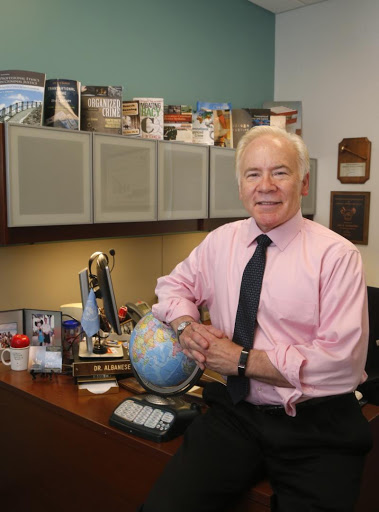 Jay S. Albanese is a professor in the Wilder School of Government & Public Affairs at Virginia Commonwealth University.  He received the Ph.D. from the School of Criminal Justice at Rutgers University. Dr. Albanese served as Chief of the International Center at the National Institute of Justice, the research arm of the U.S. Department of Justice.  He is author and editor of 20 books including Transnational Crime & the 21st Century: Criminal Enterprise, Corruption, and Opportunity. (Oxford, 2011), Transnational Organized Crime: An Overview from Six Continents (ed. with P. Reichel; Sage, 2014), Organized Crime: From the Mob to Transnational Organized Crime (Routledge, 2015), Professional Ethics in Criminal Justice: Being Ethical When No One is Looking, 4th ed. (Prentice Hall, 2016), and editor-in-chief of the Encyclopedia of Criminology & Criminal Justice (Wiley, 2014).

Dr. Albanese is recipient of the Distinguished Teaching Award from Virginia Commonwealth University, the Gerhard Mueller Award for research contributions from the Academy of Criminal Justice Sciences International Section, and the Distinguished Scholar Award from the International Association for the Study of Organized Crime. He is a past president and fellow of the Academy of Criminal Justice Sciences, and is United Nations Liaison for the American Society of Criminology.