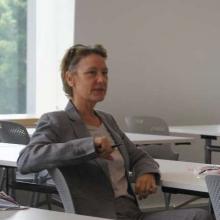 Juliette Koning is Professor in Organisational Studies at Oxford Brookes Business School (UK). She holds a PhD in social anthropology from the University of Amsterdam, The Netherlands. Her research encompasses the study of small business organisations in Southeast Asia and research on private security organisations in South Africa and the UK as well as transnational organised crime and maritime security in Indonesia. Juliette is in particular interested in crossing disciplinary boundaries which explain her research interests in organisations, leadership, security, privatisation, regulations, identity and context.

Juliette presents her research among others at EGOS (European Group for Organisational Studies), where so is co-convenor of a Standing Working Group on Organisational Ethnography. Juliette acts as PI and Co-I on externally funded ‘security’ research projects under the Partnership for Conflict, Crime & Security Research call (ESRC/AHRC) and the Centre for Research and Evidence on Security Threats scheme (CREST). She is also Research Fellow at the Security Institute for Governance and Leadership in Africa (SIGLA) at Stellenbosch University, South Africa.