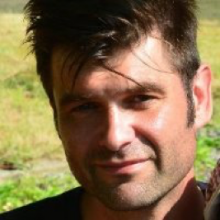 Pete Fussey is a professor of sociology at the University of Essex, UK. His main research interests focus on security, surveillance, control and the city. He has published widely in these areas and is a director of the Surveillance Studies Network, a global network of over 200 surveillance-focused academics situated in more than 50 countries. He is currently leading research activities on a five-year large-scale ESRC project analyzing the human rights implications of ICT-based and ‘big data’ enabled security practices in the US, UK, Brazil, Germany and India.

Other recent funded research has included projects analyzing counter-terrorism in the UK’s crowded spaces and, separately, at future urban resilience towards 2050. His other work focuses on organised crime in the EU with particular reference to the trafficking of children for criminal exploitation (monograph due to be published by Routledge in 2016). Recent books include Securing and Sustaining the Olympic City (Ashgate) and Terrorism and the Olympics (Routledge). A regular media commentator, Peter has also worked with and advised central and regional governments in the UK and Europe on a number of issues including the regulation of surveillance, public order policing and the security and social implications of urban mega-events. He also serves on the expert advisory panels for a number of large-scale EU initiatives researching human trafficking, urban security and resilience issues.