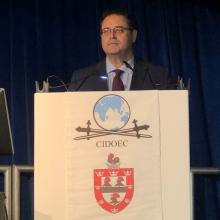 Stavros Katsios is Professor of International Economic Relations and International Economic Crime at the Ionian University, Corfu, Greece and Director of the Laboratory for Geocultural Analyses/Geolab Institute. His research is focused on International Economic Law and Economic Crime (corruption, money laundering). He is a lawyer and member of the Thessaloniki Bar and of the German Bar Association. He has studied law at the Cologne University Germany, Georgetown University, Washington D.C., USA, the Aristotle University, Thessaloniki, Greece and the “Europa-Institute” of Saarland University, Germany. Since 2004 he has been an academic member of ACAMS. He has served at the Ministry of Economics as Member of the WG for drafting the Greek Tax Law (2004). From 2011 to 2015 he served as Vice Rector for Economic Management and Development of the Ionian University. 2016-2019 he served as head of the WGII of the Greek National Risk Assessment and as a senior expert on contract by the World Bank. He has spoken at the International Symposium of Economic Crime since 2009 (Jesus College, Cambridge University, UK). He has lectured at the School of National Security (1998-2005) and at the Hellenic Banking Institute (since 2010).